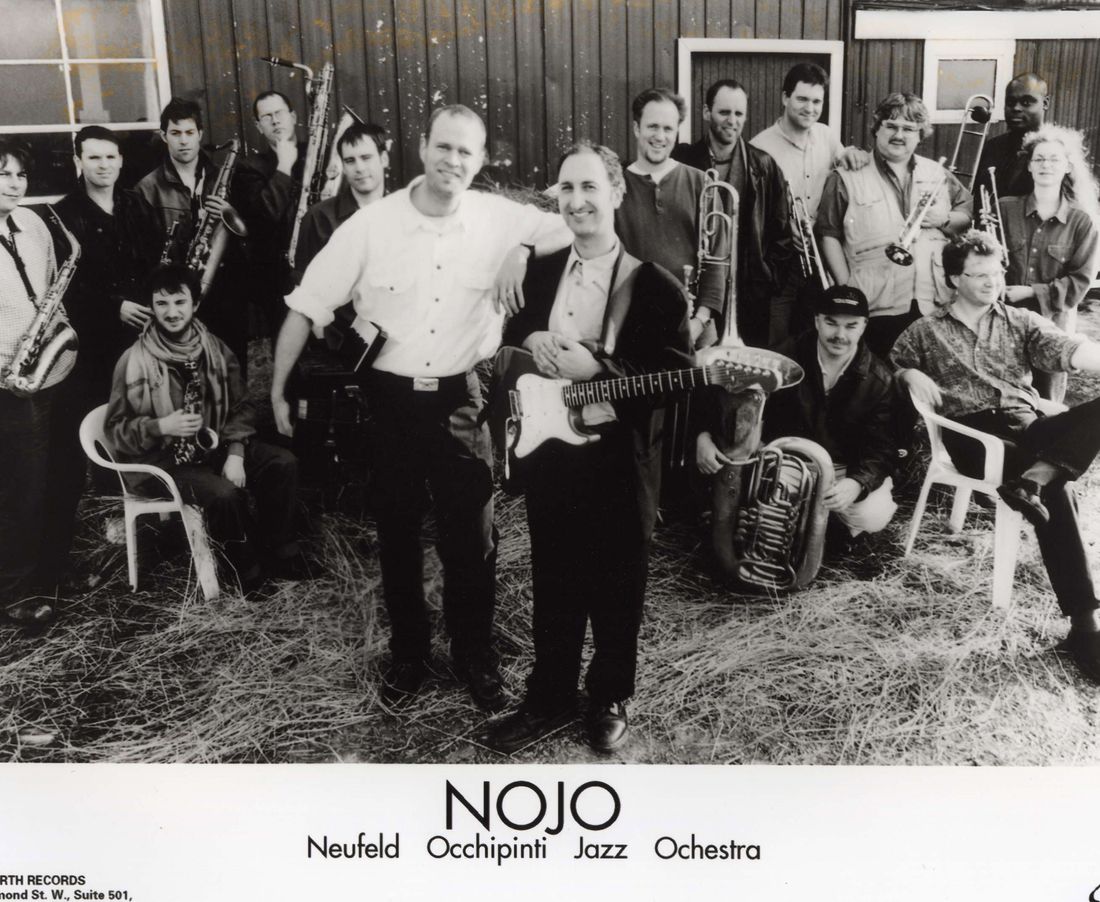 NOJO’s albums include it’s JUNO winning self-titled debut Neufeld-Occhipinti Jazz Orchestra (1995), FireWater (1996) (Both available for download on the LISTEN TO MUSIC page), two albums with guest Don Byron You Are Here (1998), and Highwire (2002), City of Neighbourhoods (2004/2005) with jazz legend Sam Rivers, and NOJO Explores the Dark Side of The Moon (2010)

“I thought I’d stay for just a few tunes but this band drew me in with their imaginative compositions, arrangements, and solos, which combined 60’s go-go beats, rippling  West African dance patterns, surrealist swinging carnival music, and hypnotic middle eastern trance songs.  I picked up a couple of their CD’s on the way out so that I won’t forget Paul Neufeld’s rocking “The Human Blockhead” or Michael Occhipinti’s shimmering high-wire tribute “The Great Farini.”              Larry Applebaum  JazzTimes

Between 1995-2005, the Neufeld-Occhipinti Jazz Orchestra released five albums of bold, original music, and each one received a JUNO Award nomination (Canada’s Grammy), while NOJO’s 1995 self-titled debut won the  JUNO for Best Contemporary Jazz Album. NOJO's last album NOJO Explores The Dark Side Of The Moon was recorded live and released in 2010, putting a unique spin on Pink Floyd's masterpiece.

Pianist Paul Neufeld and guitarist Michael Occhipinti met on their first day at York University in Toronto in 1988, and formed a rehearsal jazz orchestra in 1993 with to help them develop their individual original compositions.  A lineup of young Toronto musicians interested in their approach to big band writing took shape, and thus was born NOJO.   Making it's debut in 1994, NOJO’s many influences include African music, early blues, modern concert music, funk, r&b, reggae, and a century of jazz, yet the group’s recordings reveal a distinct and cohesive sound.  The Los Angeles Times called NOJO “one of the most imaginative large ensembles on the current jazz scene,” and the band’s music intrigued guest soloists such as saxophone great Joe Lovano, trombone virtuoso Ray Anderson, trumpeter and renowned composer Kenny Wheeler, and most notably clarinetist Don Byron and saxophone giant Sam Rivers, both of whom recorded with NOJO.

Brilliant clarinetist Don Byron became NOJO’s most frequent guest, and is featured on the recordings You Are Here (1998) and Highwire (2002).  Don performed internationally with NOJO on several occasions, including at the Umbria Jazz Winter Festival in Orvieto, Italy, the Festival de Jazz de Montreal, and at the Jazz Standard in New York City.

NOJO was thrilled to have legendary saxophonist Sam Rivers tour Canada’s jazz festivals with a 9-piece version of the band in 2003, and City of Neighbourhoods was recorded at the end of the tour in Halifax, Nova Scotia.   The CD features compositions written to feature the late Mr. Rivers' inventive work on flute, and soprano and tenor saxophones.

Alongside NOJO's five consecutive JUNO nominations, the group won the 1999 Jazz Report Award, and the 2002 National Jazz Award (also receiving nominations in 2003, 2004, and 2005), and received great acclaim in magazines such as Downbeat, Cadence, The Jazz Report, All About Jazz NYC, and JazzTimes.  NOJO was profiled on Italian TV’s RAI UNO, TV Ontario’s Studio 2, and CBC’s Jazz Beat, and a film of a 1997 concert with Don Byron in Toronto was produced in English and French for Bravo! and TFO.   NOJO has always challenged itself to undertake new creative projects and distinguished itself from other jazz groups through its willingness to explore new ideas and dedications to original music. The group performed concerts as an expanded ensemble that included a 12-piece string section, and the 21 members of NOJO With Strings performed at both the 2004 and 2005 Distillery Jazz Festival in Toronto. At the same time, NOJO explored the funkier side of its repertoire in concerts with guest rapper Phatt Al and renowned electric violinist Hugh Marsh.

NOJO still performs from time to time, but Paul Neufeld has moved on to a career in education, and Michael Occhipinti has been focussed on his various projects. NOJO's music is available (scores and parts) for purchase, and can be modified to suit all levels of jazz ensembles.  Contact Michael Occhipinti if you're interested at casaocchipinti@icloud.com.

“A Canadian band that is one of the most imaginative large ensembles on the current jazz scene…the real fascination of the album is the work of the co-leaders, compelling in virtually every composition, and often free of the sectionalized approach to instrumentation typical of most big-band writing.”

“They clearly have a lot of fun playing and their enthusiasm is contagious.  In fact, the only other large ensemble I’ve heard recently that matches NOJO’s high energy and musicianship is the acclaimed Mingus Big Band.”  Joel Roberts – allaboutjazz.com

“On Saturday it was the Canadian group NOJO that, with special guest Don Byron, delivered a pleasant surprise.  The 10-piece NOJO traveled through the world of music, built numerous shelters for free improvisation, and was above all the sound carpet for Don Byron.  NOJO and Don Byron hit you in the depths of your soul.”                                     Rinus van der Hayden   Brabants Dagblad, Netherlands

“The Toronto-based big band are neither a tradition-rooted or strictly avant-garde ensemble, and the balance of adventurousness and accessibility is the fine-line tightrope they need to traverse.  They’ve executed that feat with real skill over the course of a career that’s now in its tenth year.”

NOJO charts are Available for purchase! We don't gig much anymore, so we'd love your big band to play the music. If you've got a student band, there are charts that are edited for high school groups.